Gjesvær, among the nation's best

Innovation Norway recently voted Gjesvaer in Finnmark one of the nation's top travel destinations. And though times have changed for the small fishing village, it is still viable for both fishing and a comfortable, with soft tourism.

Gjesvær is an old fishing village in Nordkapp Municipality in Finnmark county, Norway. It is the only place in Finnmark known from the Viking Age and is mentioned in the Heimskringla saga as Geirsver. The name comes from the man's name Geir, which means "spear".

The location was used by Vikings on the way to Bjarmaland , and probably also for gathering food on the nearby Gjesværstappan islands which contain one of the largest seabird colonies in Norway.

Like most other places in Finnmark, all buildings in the village were burned down in 1944 by the German occupying forces. Gjesvær Chapel, built in 1960, is considered a cultural monument.

Gjesvær has approximately 130 inhabitants, but at the beginning of the 1970s, it had about 350 people. It has a fish plant, local shop, Seafood restaurants and primary school. The main industry is fishing, but in recent years there has been an increased emphasis on tourism, activities including fishing and bird watching trips to the Gjesværstappan nature reserve.

Gjesvær was historically a part of Måsøy Municipality, along with the sparsely populated western part of Magerøya island. There were no road connections across the island, so residents travelled by boat which was closer to Måsøy. In 1977, the 22-mile (35 km) long Norwegian County Road 156 was completed, connecting Gjesvær by a causeway to Magerøya island and then continuing on to Honningsvåg. For this reason, the municipal boundary was moved. In 1 January 1984, Gjesvær and the western part of Magerøya were transferred from Måsøy municipality to Nordkapp Municipality.

Gjesvær was known as a trading post and fish station and was presumably the first site at Magerøya which had a permanent settlement. From the early Middle Ages and up to the last century this fishing village was one of the largest and richest fishing villages in Finnmark. 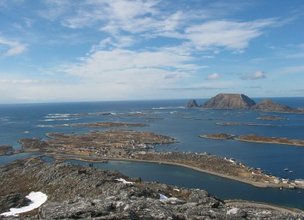 Give your self an unforgettable nature experience by visiting the busy birdlife on the birdrock Gjesværstappan. From the middle of Marth till the end of August about 2 million sea birds nest on Gjesværstappan. There are about 1 million Puffins and this is considered to be one of the largest colonies in the north of Europe. You will also see plenty of Guillemots, Sea-eagles, Razorbills, Kittiwakes and Gannets.

The purpose of the reserve is to protect this important bird rock with its wonderful plant-, bird- and other animal life which is indigenous to this area. For conservation purposes it is not permitted to go on shore but from the boat you can experience the fantastic sight.

Daily boat trips leave from Gjesvær and go to the nature reserve islands about 15 km west of the North Cape Cliff.

The fishing village Gjesvær is situated on the west side of Magerøya. 130 people live here all year round in the shelter of beautiful small and large islands. At the far end of the island group Gjesværstappan rises out of the ocean. In the summer months these islands are home to millions of seabirds that come to this coast to breed. Among these there are about 800.000 puffins, a large colony of With-tailed eagles, Cormorants, Razorbills, Gannets, Guillemots, Kittiwakes and some others. The ocean here is the best food larder in the world for these birds.